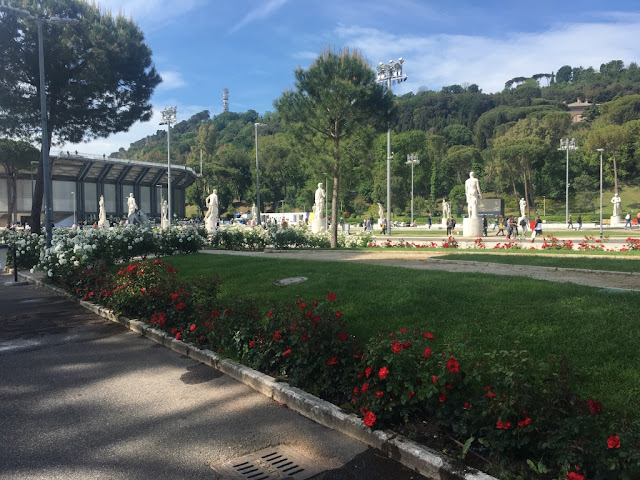 Rome has long been my #1 tennis bucket list item. I hadn't been able to attend the past few years due to work commitments, so I jumped at the chance to finally attend the women's and men's joint event in Rome after a job change, and thankfully my tennis-loving mom was keen to come along.

As I started to prep for this trip, I struggled to find much information about the tournament, so thankfully Tennis Twitter was there to help. Here's info for anyone looking to attend the International BNL d'Italia Rome. I've tackled the following topics, which were of most interest to me, but shoot me a comment if you have other questions.

I started looking at tickets in early April, and found the costs a bit pricey for stadium seats. I hesitated to purchase too many tickets too soon as I was balancing being a first-time visitor to Rome with attending the tennis. And at this stage, I wasn't sure which of my faves were going to show up in Rome. I initially bought two grounds passes for the opening Saturday and Monday. I then wanted to get stadium seats for two days - Wednesday and Thursday - and went about requesting accessible seats due to my mom's leg issues (see more below).

You can buy reserved seats in both the Stadium and Grandstand, but there is also a general admission area in Grandstand. To find it, head to the very back of the Grandstand. It's great to have this option!

Be warned - I had trouble using the Rome tourney site to buy tickets - the site blocked my credit card a few times before I was able to pay (my credit card company told me the transaction was not blocked on their end).

There are two sites for ticket purchase, the official tourney site and Ticketone.IT. Tickets go on sale quite early, July, according to the website. 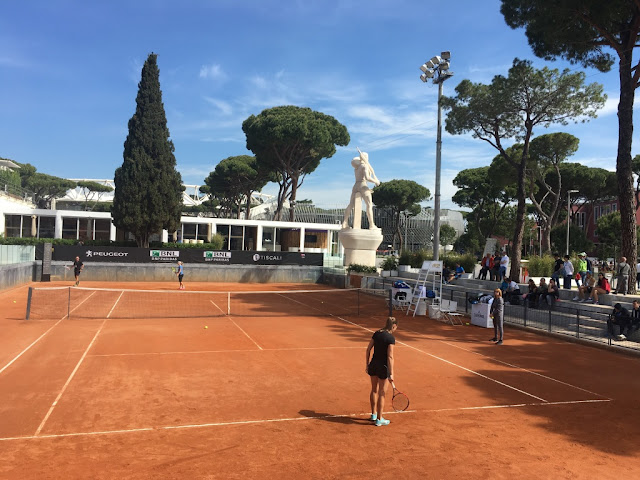 The Rome tourney site posted a specific bag policy but in reality it did not exist. I chose to be obedient on day one and brought in the very small bag which is not to exceed 25 cm x 25 cm x 25 cm. It was a struggle to find one that small, so it was not amusing to get into the grounds and see people literally pulling suitcases around. So, don't worry about bag size. For our remaining three days I brought in my normal travel bag, and had a second small carry bag to bring in an umbrella, our snacks and jacket (it was the coldest weather in May in Rome in like 40 years. Brr!)

As the baggage check wasn't much, I brought in snacks too - fruit, crackers, etc. I also brought in our own sandwiches at least twice since I hadn't had any issues bringing in food.

Be warned - they seem to have something against metal bottles in Rome. Below is a photo I took of the boxes sitting by the security gates one day. I understand we're not allowed to bring in soft drinks, etc, but I was appalled at all the fillable metal bottles they took away. Disgusting! Since I've had issues with these bottles at many other tourneys, we just brought in plastic water bottles to fill up onsite.

When in Rome, you expect to be surrounded by pizza, pastries and pasta! I found 2 of the 3 at the Rome tourney (cant't recall seeing pasta?). I thought the onsite food was fine. We had pizza a few times, sandwiches, arancini and some sweet pastries during our 4 days onsite. And espresso of course!


Most of the food stalls are near the Stadium and Pietrangeli, but if you're planning to camp out in Grandstand your food options are very limited. There are no food stalls near it so you have to go back toward the main entrance to buy any food.

In the stadium and grandstand, vendors sell drinks, popcorn and ice cream which is a good option but not quite enough to get you through a day.

There was also no water fountains near Grandstand so that wasn't great either. I'd suggest bringing in some drinks and find water foundations behind Pietrangeli to fill them up (thanks Tennis Twitter family for letting me know where to fill my water bottles - in 100 years I would not have found it without their help.)

Getting there and around

Rome reminded me a bit of Roland Garros - there was only one main path on the grounds which made life difficult. There are two entrances - on the south side (if you're walking in it's straight ahead as you walk over the bridge) and along the east side (which takes you in by the Grandstand and main food options and retail shops).

In terms of transportation to the site, we mostly got a taxi, and we walked a few times. I booked us an airbnb in Flaminio so we would be very close to the venue and I'm so glad we did.


I can't speak to public transport options, but I highly recommend using the MyTaxi app (which we used exclusively during our 10 days in Rome) for pretty easy rides around Rome in general.

We walked back when it was raining and we had no chance to get a taxi. The walk was great actually, because you walk over a bridge and on the other side are plenty of cafes and pubs to either wait out bad weather, or enjoy a drink or meal.

For taxi drop offs, the east gate is the best bet. There were ticket booths at both gates but we had to pick up our accessible tickets at the south gate). 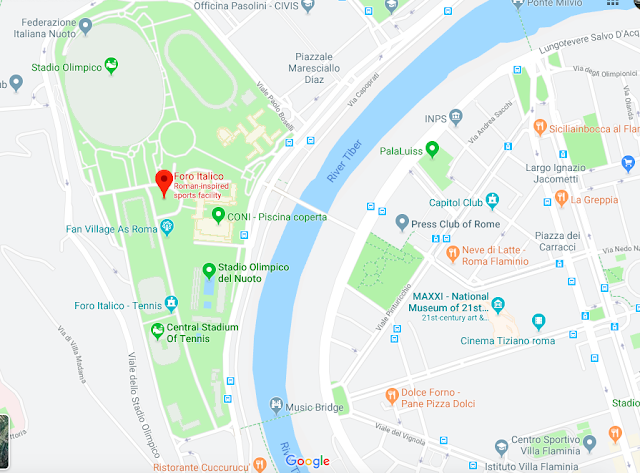 On the map above you scan see the Foro Italico and surrounding area (Flaminio). You can see the Music Bridge on the map, and I saw many people arriving that way. The south entrance always looked a bit more crowded, so that's why I suggest going to the east gate to get dropped off. The sidewalks are pretty narrow but it is probably a 5-10 minute walk up to the east entrance which brings you nearer to Grandstand.

Rome it such a great city, and with the tourney taking place in May the city will be very busy.  We found it easy to do both the tourney and the many amazing sites in the city during our 9 days in Rome. I wrote up a long post on my travel blog with tips about the city. You can view it here.

Here are a few more photos showing off the stunning Foro Italico: