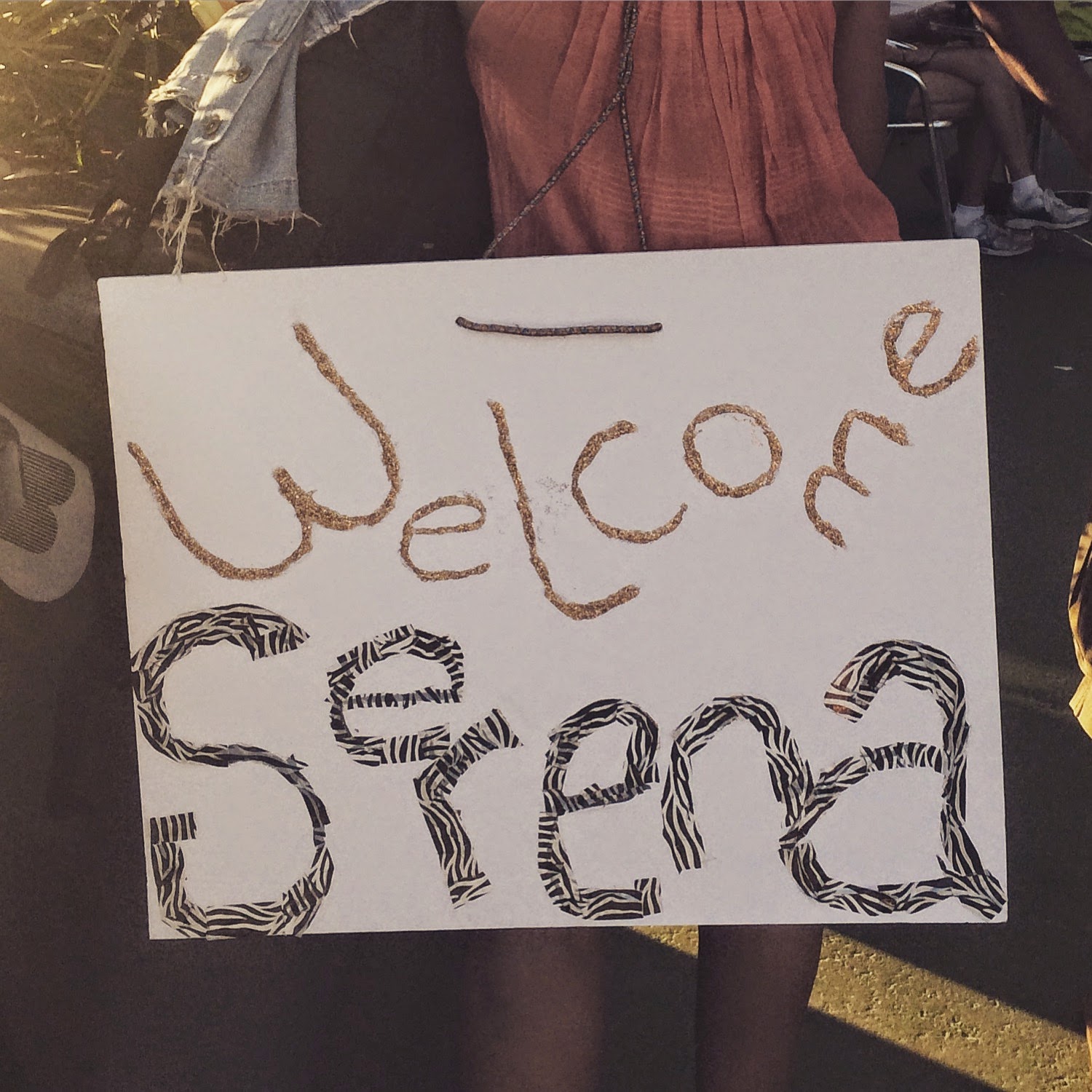 I took this photo on Friday, March 13, 2015, mere hours before Serena Williams would step back into a stadium that had led to such pain that she refused to step back in it for 14 years.

I've been on the Serena Williams fan train since the very beginning. Back in the mid-1990s, I heard about two sisters from Compton who were expected to change the tennis world, at least according to their infamous father, Richard. And boy was he right.

Throughout the past 20 years, following Serena's career has been a roller coaster ride. There have been extreme high and scary lows, moments of awe and wonder and others of sadness and disappointment.

When Serena announced on February 4, 2015 that she would return to the Indian Wells tournament, I was shocked, then excited, then proud as I watched her announce her comeback and partnership with the Equal Justice Initiative. I questioned why she would want to go back, and how it happened. I wondered if Venus would return as well, and how the crowd would welcome and support her.

Since 2001 I had grown used to Serena's absence from the tournament which had been the place where boos rained down on her in the final by an angry, hostile crowd. I honestly tired of hearing about Serena and Venus' absence from Indian Wells every year, but not because I didn't find their stance warranted. Like most painful memories, reliving 2001 IW meant remembering the criticism of the Williams family back in those days and around the incident.The unproven rumors that Richard 'decided' who won their matches. That race wasn't a factor in the crowd's despicable behavior that day. That Venus withdrew seconds before the scheduled semifinal.

It appeared that until Serena and Venus retired we would hear the same narratives again each year. I'm sure the tournament wished it would all just disappear so that they weren't weighed down by the past. But you can't escape your past and I think that drove Serena to once again step foot on the court that had caused her such pain. As she would later say, it was time to create new memories.

Serena Williams is a legend, not just in tennis but in sports worldwide. Love her or not, you can't argue with her legacy and impact on the game. So to have this amazing player absent from one of the biggest tournaments in the world was a glaring one each year.

When Serena made her announcement that she was going back, I decided I would also go to this tournament which in my mind has had a major black mark on it since 2001. I bought the night session tickets for both Friday and Saturday of the opening weekend, fully expecting Serena's match to be held at night.

In the days leading up to the tournament, the little things made me a bit emotional about Serena's return. On my way to Palm Springs, the draw came out with Serena at the top as the #1 seed.  Then it was announced that Serena would play the first night match on Friday, March 13. I checked several times that I did indeed have that ticket (I did) so that I would be in the stadium for her opening match.

I've watched Serena play in 10 different tournaments around the world in the past 7 years: Australian Open, Miami, Charleston, Eastbourne, Wimbledon, Montreal, Cincinnati, US Open, WTA Finals and the Olympics. I've seen her win grand slam finals (US Open 2013, US Open 2014), lose in a grand slam after winning the previous one (Australian Open 2008). I've seen her both defeat and lose to her big sister (Charleston 2013, Montreal 2015). I've seen her come back from 10-months out of the game after major, scary health problems (Eastbourne 2011).

This time, I was really nervous. How would this Indian Wells crowd show themselves to the WTA #1, holder of 19 grand slams? Had they built up resentment of her since 2001 due to the dark cloud that hung above Indian Wells? Did they respect her career and desperately want her back in their tournament? I had no idea.

On my first day at Indian Wells, I was watching Victoria Azarenka practice onsite with Serena's former hitting partner Sascha Bajin when I started chatting to gentleman sitting next to me. Without prompting, he said "Well Serena is gracing us with her presence this year."

I pursed my lips and did not respond, instead I focused on watching Vika practice with Sascha (which was pretty surreal). Was this a common view in Indian Wells? Was I right to feel scared about their response?

Friday, March 13 arrived and I was in Stadium 1 for the day session when this happened:

Some boos near me when @AndrewKrasny says we're in for a big night with the return of Serena. #youbeyouIW
— Steph (@StephintheUS) March 13, 2015

Surely not. But there were clear boos near me so this didn't help my anxiety for her comeback match that night.

Hours later, I made my way back into Stadium 1 and prepared myself for the return.  The crowd filled in pretty well before the 7pm start. When Serena was announced, all I heard were applause and cheers. She stepped on the court and waved. The crowd was on its feet - no boos, no jeers. Just appreciation for a tennis legend and an enthusiastic welcome back. My eyes welled as the standing ovation kept going, and I could see on the screen that Serena had tears in her eyes too. Later I watched the video of Serena and her box. Seeing the emotion on her face, and her sister Isha, hit home what a huge step this was for the family.


The cheers continued as Serena's long, long list of tennis achievements was announced.

The support kept going throughout the match as Serena struggled to get a game on the board and nearly went down 4-0. They cheered loudly when she got back on serve and eventually won the first set. She was definitely not relaxed on the court, and despite the will of the crowd the second set was just as difficult. Props to her tricky opponent, Monica Niculescu, who rose to the big occasion and played her unconventional game well. In the end tho, it was Serena who made a successful return and the crowd roared.

For Serena, this wasn't about coming to a tournament and winning matches and a trophy. This was about moving on from the past and trying to move on from past wrongs. She said on the Tennis Channel afterward that returning to IW may have been the biggest win of her career. In the context of everything she's achieved in the sport, that was some statement.

No one can understand what damage the treatment of Serena, the 19-year old, caused her and her family. But I don't feel there has ever been due diligence by the tournament to clear up what happened the day of that 2001 semifinal. Venus, Serena and the Williams family have said repeatedly that Venus notified the tournament about her need to withdraw hours before the scheduled match. In her book, Serena said they wondered why the announcement wasn't being made.

I have always thought it would have been very simple for the WTA and IW to clarify the timeline of communication that day and take some responsibility for the mess that followed. Why wasn't this ever cleared up? I guess we will never know.

Serena is moving on from the past and I'll do the same. I'm so proud of her decision and proud of the way the crowd embraced her. After her initial match, I saw Serena in her matches against Sloane Stephens and Timea Bacsinsky. The crowd support was unwavering. Serena intends to return in 2016, and we'll see if Venus follows suit. 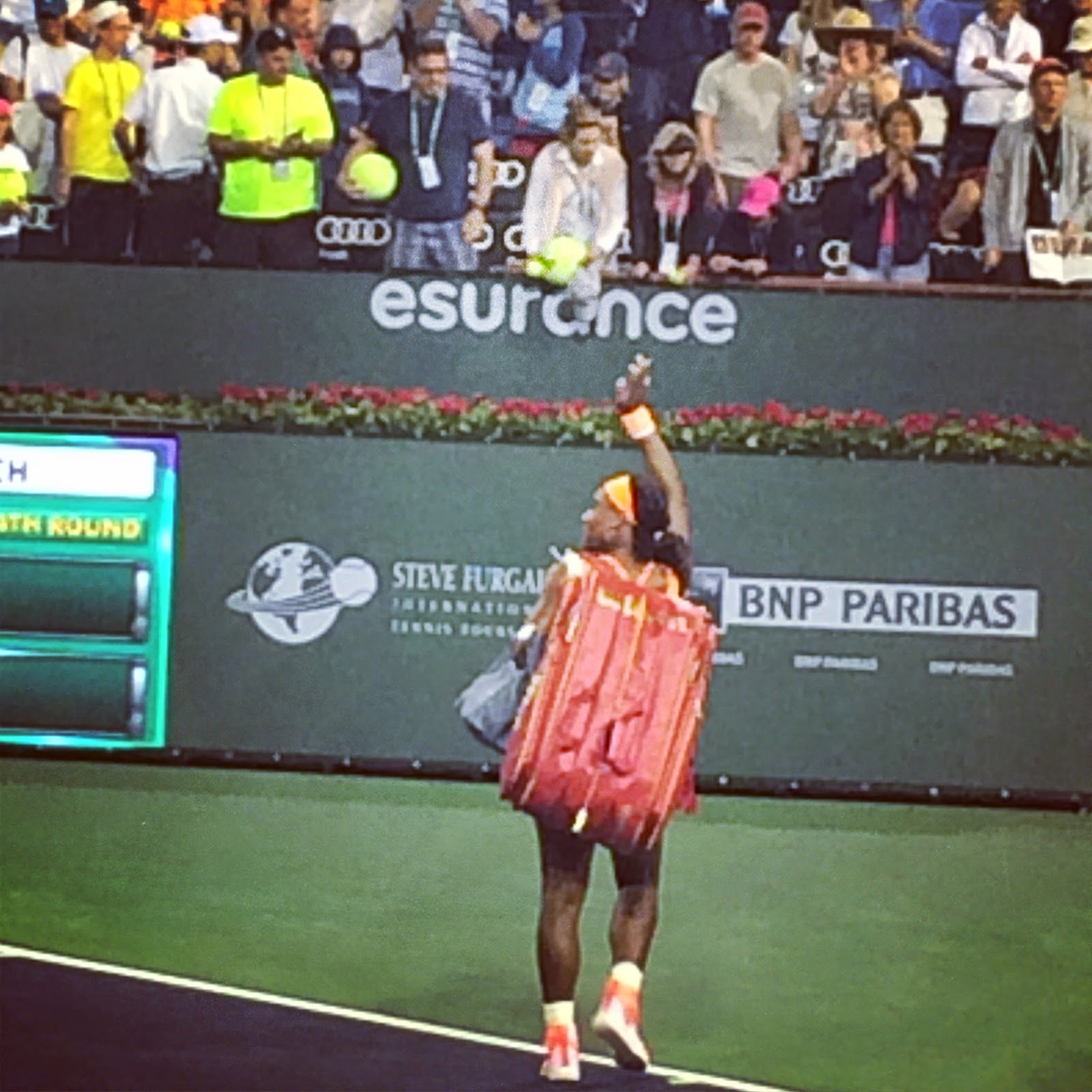