Reliving tennis history through a stack of VHS tapes 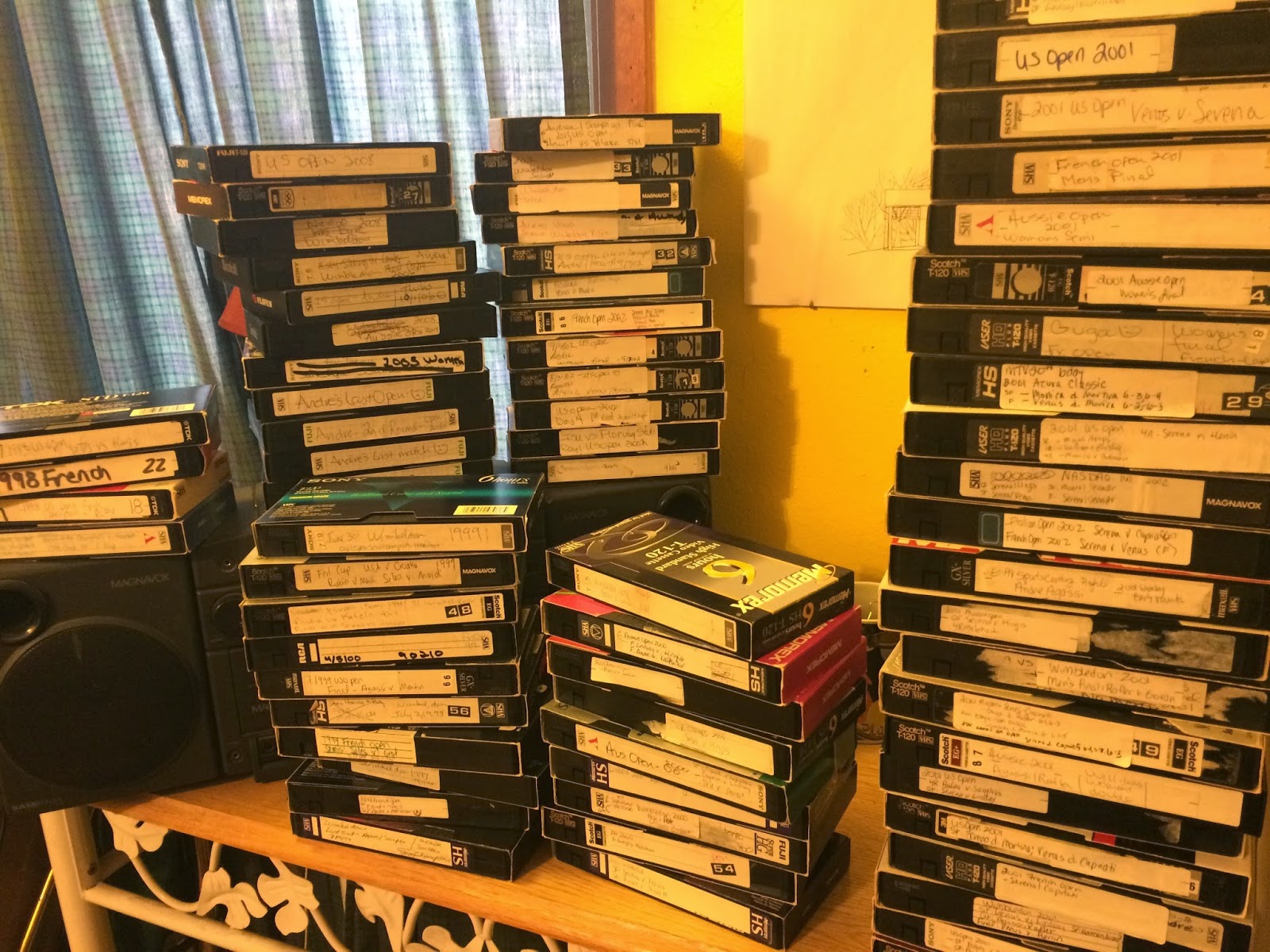 I recently took a major walk down a tennis-filled memory lane thanks to a project I stumbled upon while I'm staying at my childhood home. I've been intent on decluttering the house, and I couldn't keep harassing my mom to throw things out when I knew I had a huge container full of tennis tapes that was taking up a heap of space.

Feeling brave a few weeks ago, I opened the container and peeked inside. The container was packed full (plus there were more tapes that couldn't fit in the container) and in order to take stock, I sorted them by year to see what I was dealing with. I was shocked to see there were about 80 videotapes. As Dick Enberg likes to say: "Oh my."

I couldn't just throw these tapes out - this is my tennis past, the documentation of many years of my tennis obsession that began in 1990 with Monica Seles, Jennifer Capriati and Andre Agassi. There was no way I could just sit and watch every tape, so I looked into ways to convert the video tapes and thanks to some help from Chris I purchased a video capture device then dove head first into a mass VHS-digital conversion project to save these precious tennis moments. I'm thankful my parents still have a trusty VCR and that I didn't break it during this process!

I started my project with the biggest stack of tapes from the 1999-2002 tennis days, and as I went through each one, I was reminded of where I was in life when each match happened. For example, the night before I flew to Beijing to live for what would be two years, I was up all night watching Agassi win the 1999 French Open (it was shown on tape delay for years in my area due to the Jerry Lewis telethon). There was the 2000 Chase Championships match between Seles and Martina Hingis, which I recall watching with one eye open in the middle of the night in Beijing hoping Seles would win (she didn't).

I returned to the US from China in mid-2001, so I found heaps of matches taped from the 18-month period when I was back in the US (I moved to South Korea in late December 2002). This time period coincided with the Williams Sisters being the talk of the tour and I was (and still am) a huge Williams fan so I had a lot of their matches and interviews.

I'm thankful my mother is also a tennis nut, as I worked at a summer camp in Pennsylvania in 2002, so all the French Open, Wimbledon and US Open matches were ones she recorded and saved for me. Because of her, I found gems like this from 2002 Wimbledon, when Serena talked about how much she wanted to win Wimbledon (and she did win the first of her five titles that year):


The more matches I got through, the more I realized the best part of these tennis tapes were all the fun interviews, player montages and preview pieces to highly-anticipated matches.

It was surreal to relive the Hingis vs Williams Sisters drama, commentary about suspected 'family' match fixing and their brashness to declare they wanted to be #1. I'm happy my project spurred on this post from David Kane of The Tennis Island, who looked back at what a key time 2001 was in the women's game. This period was one of my favorites in WTA history - there was no shortage of drama!

In addition to all the tennis matches, I loved seeing old commercials including Jennifer Capriati's Oil of Olay commercial from 1991, and Agassi's Rock and Roll Nike ad with the Red Hot Chili Peppers that same year. And the music played during montages and match highlights were hysterical, as were the progressions of hairdos on Chris Evert and Mary Carillo. 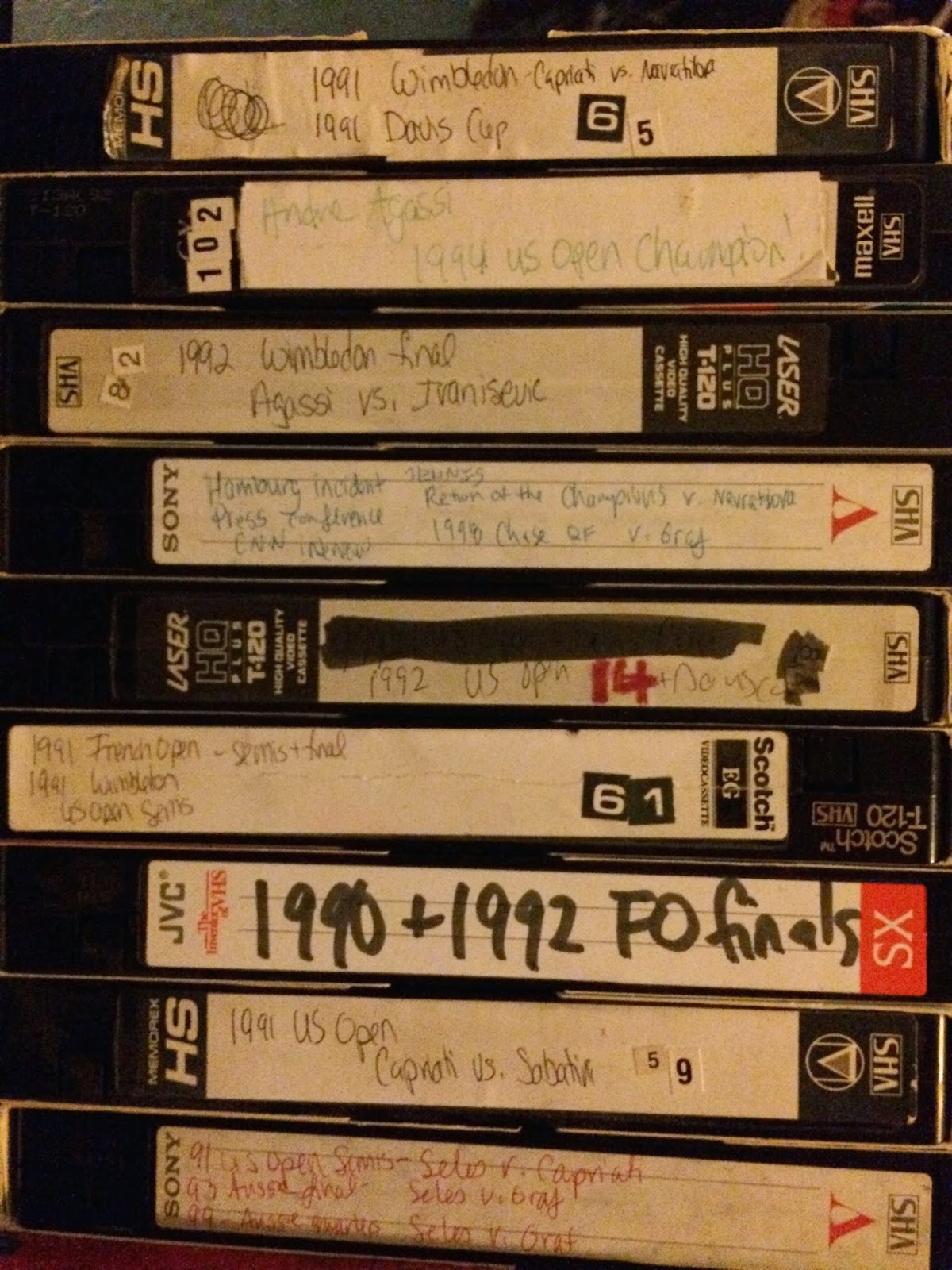 But along with revisiting my fond moments, darkness was also part of the reality of such an undertaking. Most tennis fans have matches they never want to hear about again, but as a Seles fan, it's so painful to relive the awful events around her stabbing in Hamburg in 1993. I was such a huge Seles fan so going through a tape of her news conference and coverage of the attack was pretty hard. There was also an in-depth feature on her on CNN which aired 4 months after the attack. Those days were hard to relive, but I still wanted to preserve them.

Less harrowing was revisiting some of the tough losses my favorites endured. I think the hardest match I found to relive was Seles' loss to Aranxta Sanchez-Vicario in the final of the 1998 French Open. Monica was the ultimate feel-good story in that tournament. She'd just lost her father to cancer and crushed then #1 Martina Hingis in the semifinal to advance to her fourth French Open final. She had a 14-2 record against Sanchez-Vicario, but ended up losing in three sets. That match hurt me at the time, and it still does. It was so wrong that the tennis gods couldn't give her that final after all she'd endured. Seeing this match led me to ask Tennis Twitter what one match they would change the outcome to if they had the power. I got some fun responses - for me, I believe this match would be my #1 choice.

Then there was rewatching Agassi play his final Wimbledon match against Rafael Nadal in 2006, and his last tournament at the US Open that same year. I admit I had tears (again) as I watched my first ATP-love retire in front of a loud New York crowd who had always cheered so loud for him. It's amazing this happened more than 8 years ago.

Once I survived those emotional turmoils, I tackled one last group of tapes - from 2005 to 2009. I lived in New Zealand during this entire period, so my tennis-loving mom had about 10 tapes of matches. I wasn't worried about preserving the matches as so many are on Youtube from this period, but I did want to save the interview clips special to US coverage and features. One of the best was this piece on Nadal and Federer which aired during one of the rain delays during the legendary 2008 Wimbledon final.

It took me around two weeks to sort through the 80 tapes that have taken up residence in my parents' home, so it certainly was a time-consuming process. I was often afraid to fast forward through chunks of tapes because often the hidden gems were shown during other matches. But I'm lucky I had the time and will to do this. I love sharing tennis memories with others, whether it's over a beer during a tournament or through reliving my live tennis experiences on this blog.

I will continue to upload videos to my Youtube Channel here but some of the full matches may have to wait as it took around 10 hours to load one of the most popular videos I've put up: "Diary of Serena Williams" show which aired on MTV in 2002.

I have been thanked by many of the Tennis Twitter family for posting the videos (over 150 already!), and although I did this for myself, it's been wonderful to share so many great past tennis moments with the global tennis community.
on December 12, 2014 4 comments:

Email ThisBlogThis!Share to TwitterShare to FacebookShare to Pinterest
Labels: Blast from the past
Newer Posts Older Posts Home
Subscribe to: Posts (Atom)