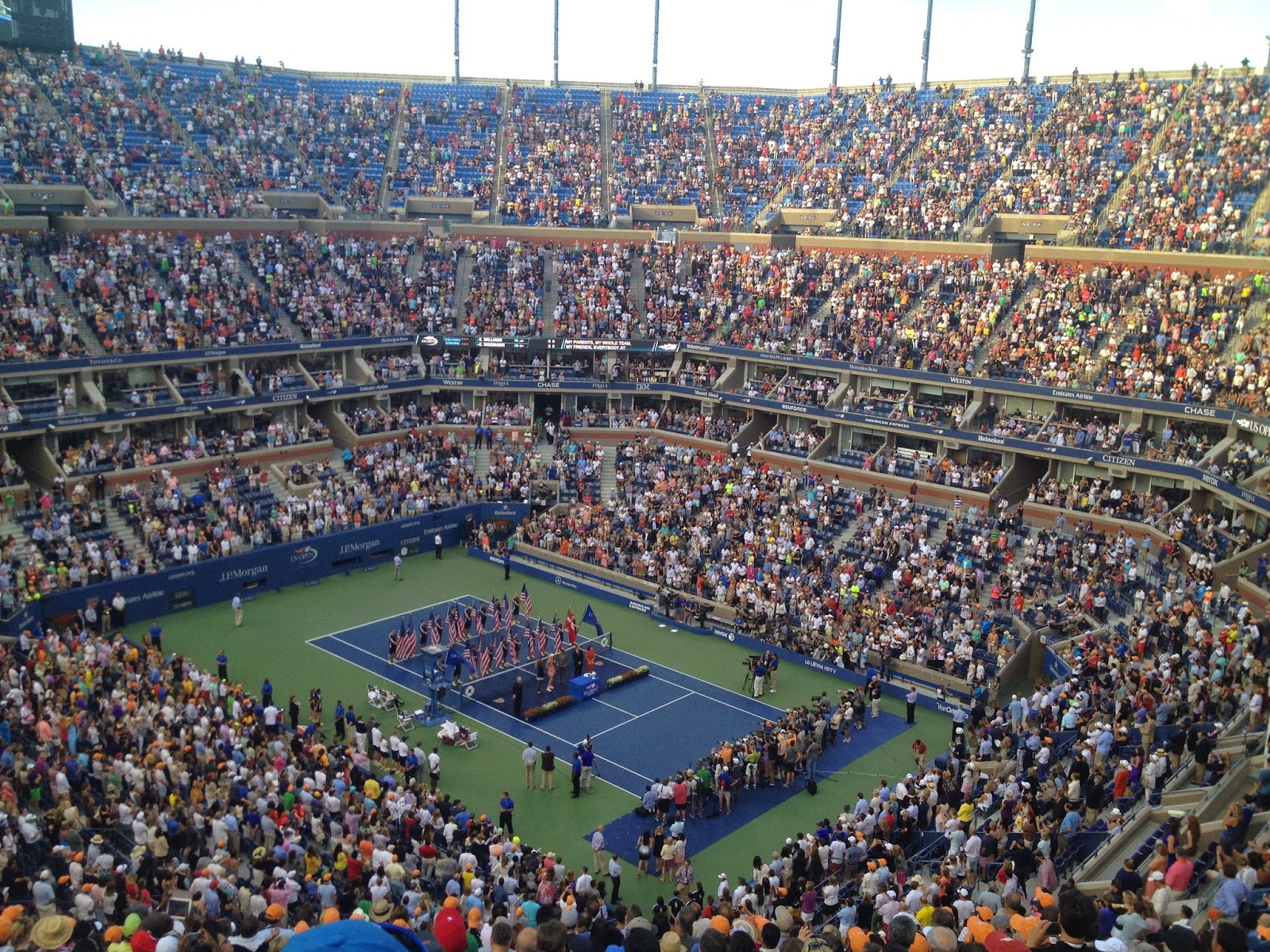 2014 marked my fifth visit to the US Open and it was amazing, exhausting and so memorable. Each grand slam is so unique, no matter how familiar the tournament feels, and this year was no exception.

I was onsite for 18 days of the US Open, starting with Day 1 of the qualifying tournament and ending with the women's final. The only days I missed were Arthur Ashe Kids' Day, the men's semifinals and men's final.

In addition to watching tennis as a fan, I worked for ESPN for 12 days of the main draw as a logger (will explain below) and was able to cover a few pre-Open events for OnTheGoTennis which was so fun. I got to talk to some of the players as they arrived at the Taste of Tennis event and also interviewed Victoria Azarenka, Sloane Stephens and John Isner at Party with the Pros (see my recap here).

Qualifying Tournament
Having never attending qualies for any grand slam, it was great to finally see what this part of the tourney entails. The US Open offers free admission for the qualifying rounds which is a great way to offer a cheap day out for families and tennis fans. I was surprised at the number of people there (lots!) and although very little was open around the grounds, there were still a few food vendors available if you don't want to bring your own food in.

In addition to the qualies matches, the week before a slam is a great time to watch player practices without the normal crowds during a tournament. In the four days of the qualies, I ran myself ragged looping around from qualies matches to the practice courts plus Grandstand and Louis Armstrong to see which players I might find there. Although practice schedules are publicized on both the US Open website and on the grounds, this is not the case during qualies. 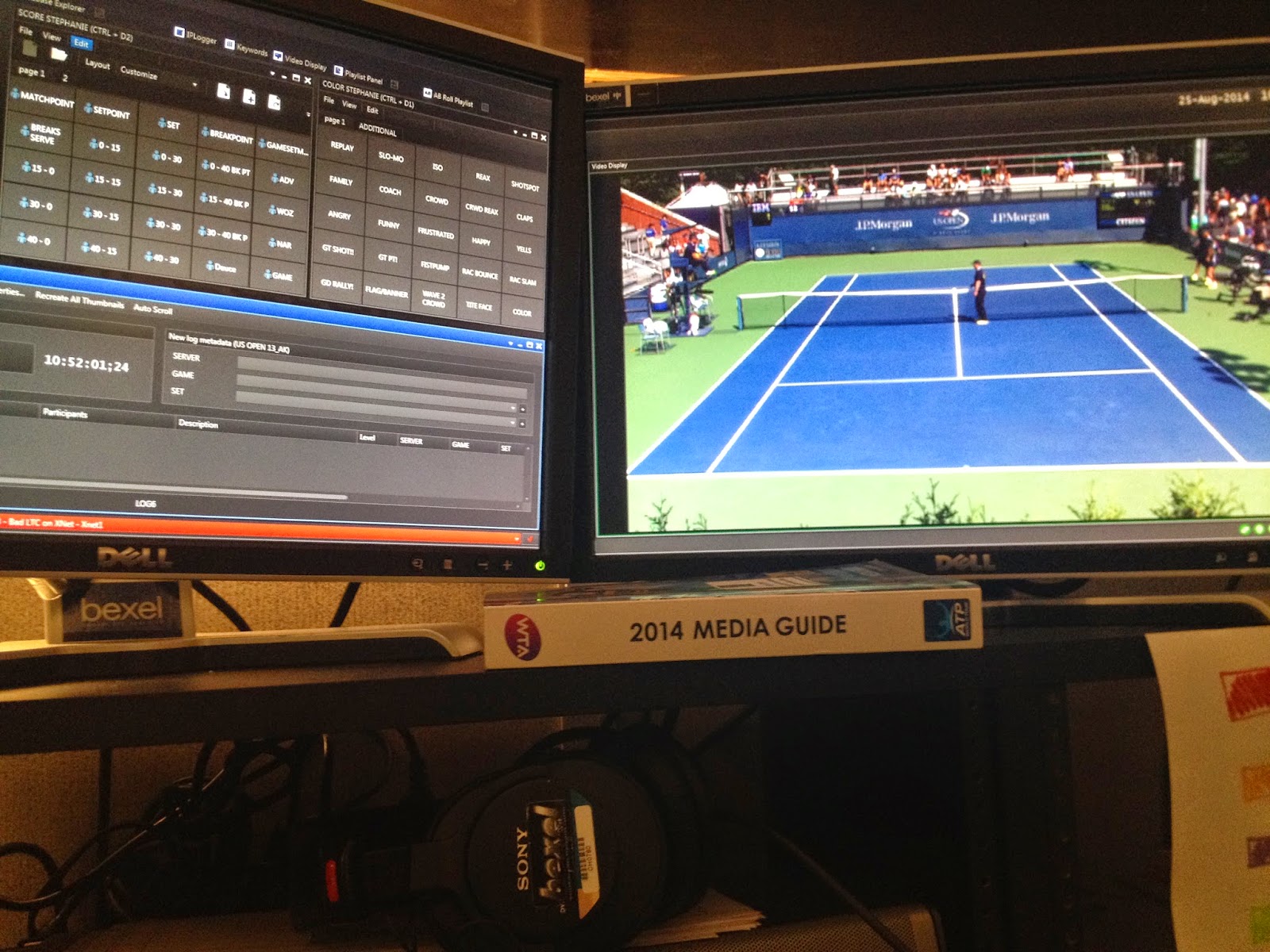 This year, I got the opportunity to work for ESPN during most of the main draw (12 days plus a day of training) as a logger. I had no idea what this really entailed, and it was a very cool experience. We had one day of training and we got to learn the program while logging the 2013 US Open men's final which was great fun for this Rafa fan!

Here's what match logging is all about:

Each day, each logger was assigned a court and we'd be responsible for logging whatever matches were on that court that day. Week one was rough - some very long days/nights - and I was thankful for the endless supply of coffee, soft drinks and snacks to stay alert. Sometimes we'd be done early but of course I was the one assigned to the night session when Kei Nishikori took on Milos Raonic and they battled until 2.26am. I have never watched every point of a five-set match so closely!

Logging wasn't too hard if you watch as much tennis (and have played as much) as I have, but it was a very different way to experience a grand slam. If I finished for the day in time, or had a late start, I was able to watch matches which was great. Of course I wouldn't just leave for the night if there was still tennis going on!

All in all it was an amazing three weeks in NYC, and here are just a few final thoughts on the 2014 US Open:

History. Serena won her 18th grand slam, and the Bryan Brothers won their 100th title together. Seeing these two finals back to back made for an incredible Sunday. Serena was so impressive in her last few matches particularly and it was amazing to see how much it meant to her to get to 18.

The new viewing areas for Courts 4-6 and the practice courts. Before being gutted after last year's US Open, the US Open practice courts were a hard spot to watch player practices. Fans love watching practices - it's often the only time many can get up close to players - and it's great the US Open finally made the area easier to watch. Now there's a viewing gallery over the practice courts as well as a schedule posted nearby which is most welcome.

New faces. As much as I love the success by 30somethings Serena, Li Na, Federer, the Bryans etc it was great to see so many new faces at this year's Open. From Belinda Bencic and Alex Krunic to Dominic Thiem, so many headlines were grabbed by the youngsters and that was great. I also did love that we got a 'what the heck' men's final, won by Marin Cilic (what?) over Kei Nishikori. With two slams won by non-'big 4' members, it's been a better, more unpredictable year for the ATP and I think this is good for the game (tho I would never mind Rafa winning all four slams in a year!)

On a fandom note, not having defending champ Rafa Nadal and past champ Juan Martin Del Potro in the draw was a big hit on the men's side. On a personal note, these are two of my most fave ATPers and I just felt the men's side lacks a certain buzz without Rafa there. And not having Li Na there on the ladies side was a bummer too. I hate injuries and hope all three return sooner than later.

The weather. I used to live in New Zealand and attended the Australian Open a lot so I know all about watching tennis in searing heat, but goodness me the heat/humidity in Flushing was rough this year. I was lucky to be inside often in a/c while match logging but I felt for players and fans who had to withstand the last summer blast. But we only had a few rain delays which was pretty remarkable considering the past few years at the Open.

See you next year!

Email ThisBlogThis!Share to TwitterShare to FacebookShare to Pinterest
Labels: Serena, US Open