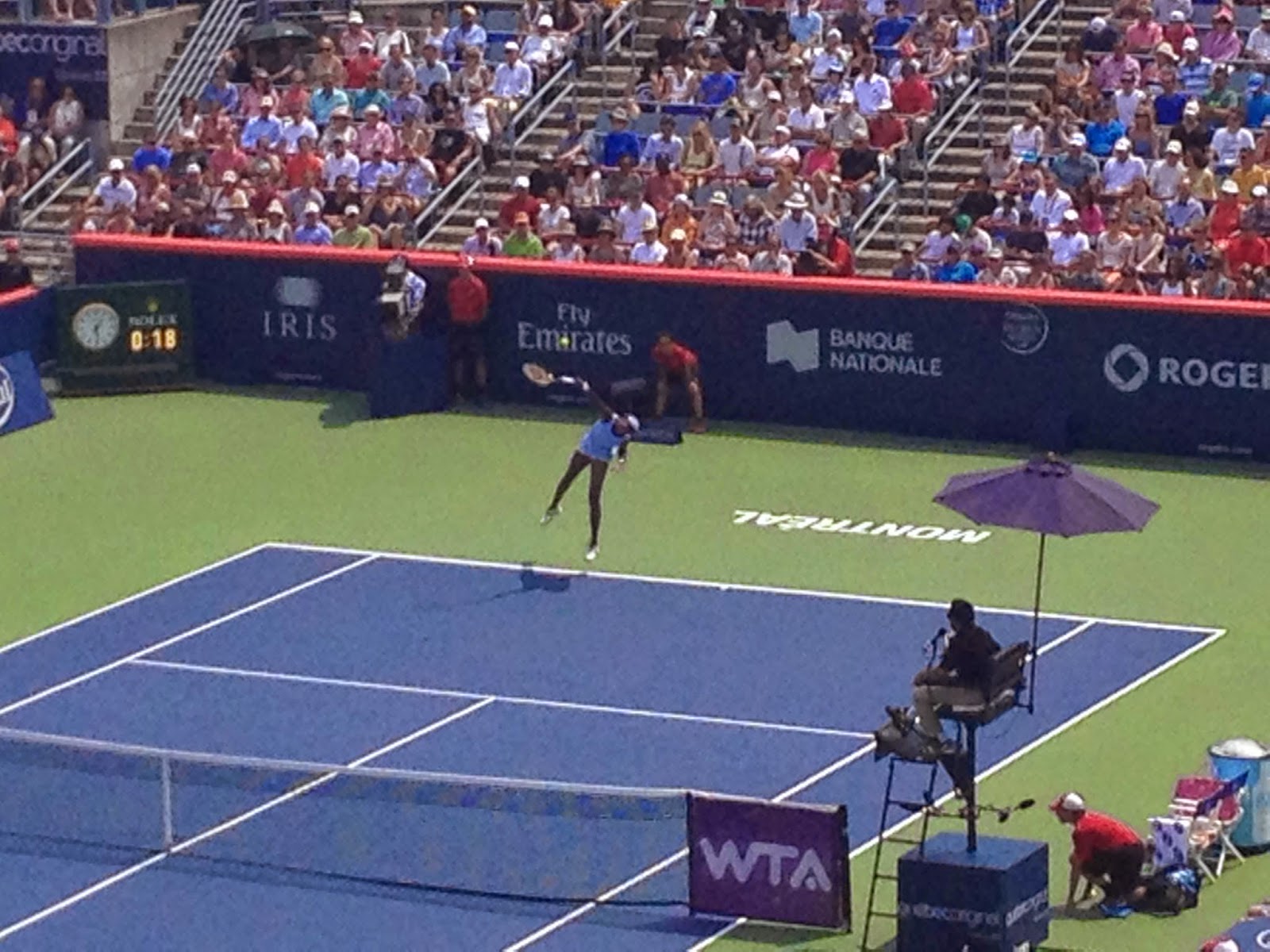 Sometimes being spontaneous pays off. Last week, while watching the Rogers Cup event in Montréal, I decided that a short (!) 400 miles were all that stood between me and another weekend of live tennis. I’d already gone to and but as I’m leaving the East Coast after the US Open, I decided to book a last-minute trip up north above the border.

When I left work at 1pm ET on Friday, Serena had just dropped the first set to Caroline Wozniacki in their quarterfinal clash, so I was nervous that the possible Serena/Venus semifinal may end up being Woz vs Carla Suarez Navarro. But, being a tennis fan above all else I was prepared for whatever the tennis gods gave me.

My adorable tennis fan mom was helping keep me abreast of the scores but it was a nervous drive as I had my fingers and toes crossed for Venus vs Serena, part XXV. Finally Serena clinched the win and Venus followed so my journey was rewarded by one of the best tournaments I’ve been to.

I’d only ever spent a day or so in more than 10 years ago and after spending the weekend there I must say it’s just a beautiful city with such friendly people. If you ever have a chance to go to either or the Coupe Rogers, I really urge you to do it.

I usually evaluate a tourney based on its ticketing process, crowd and location. Here are a few reasons why I rate this as a fantastic tennis event to attend:

Venue location and access
Uniprix Stadium is set at the southeast corner of Parc Jarry and I must say it was one of the loveliest locations of any stadium I’d seen. Walking past flowers, ponds and picnickers on the way in and out of the grounds was such a peaceful entrance into a tennis tourney.

Tickets to Coupe Rogers give tennis fans free use of public transport to and from the stadium which was very nice. I actually stayed only a 15-minute walk away (thanks Airbnb) but on finals day I met a friend beforehand so he directed me to the right bus which took me right by the park. I just showed the bus driver my tennis ticket and I was good to go. Nice!

Grounds
There is so much space at Coupe Rogers – lots of areas to sit and not cramped at all which was nice. Many times it’s such a pain to wait in between day and night sessions or before matches start but here was no issue. There was a large seating area in front of two screens showing courts in both and , many spacious eating areas and you could always pop out to the park for a rest.

Ticketing process
In general I don’t wait so long to buy tickets but in this case my lateness was not rewarded by good seats. Most tickets being resold on Stubhub were only delivered via UPS so for Saturday, I had to buy the back row 300-level seats that were left. For Sunday tho, I did find a fairly decent ticket in the first row of section 303 for less than the regularly priced Saturday tickets.

Advice – if you decide to go and can afford it, opt for the 200 section. The 300 section here is a bit like the Arthur Ashe Stadium Promenade – people are constantly coming in and out which can be a real pain when people are standing in front of you during play. I still wonder who gets up when a player is about to serve for the match? Not this tennis nerd. 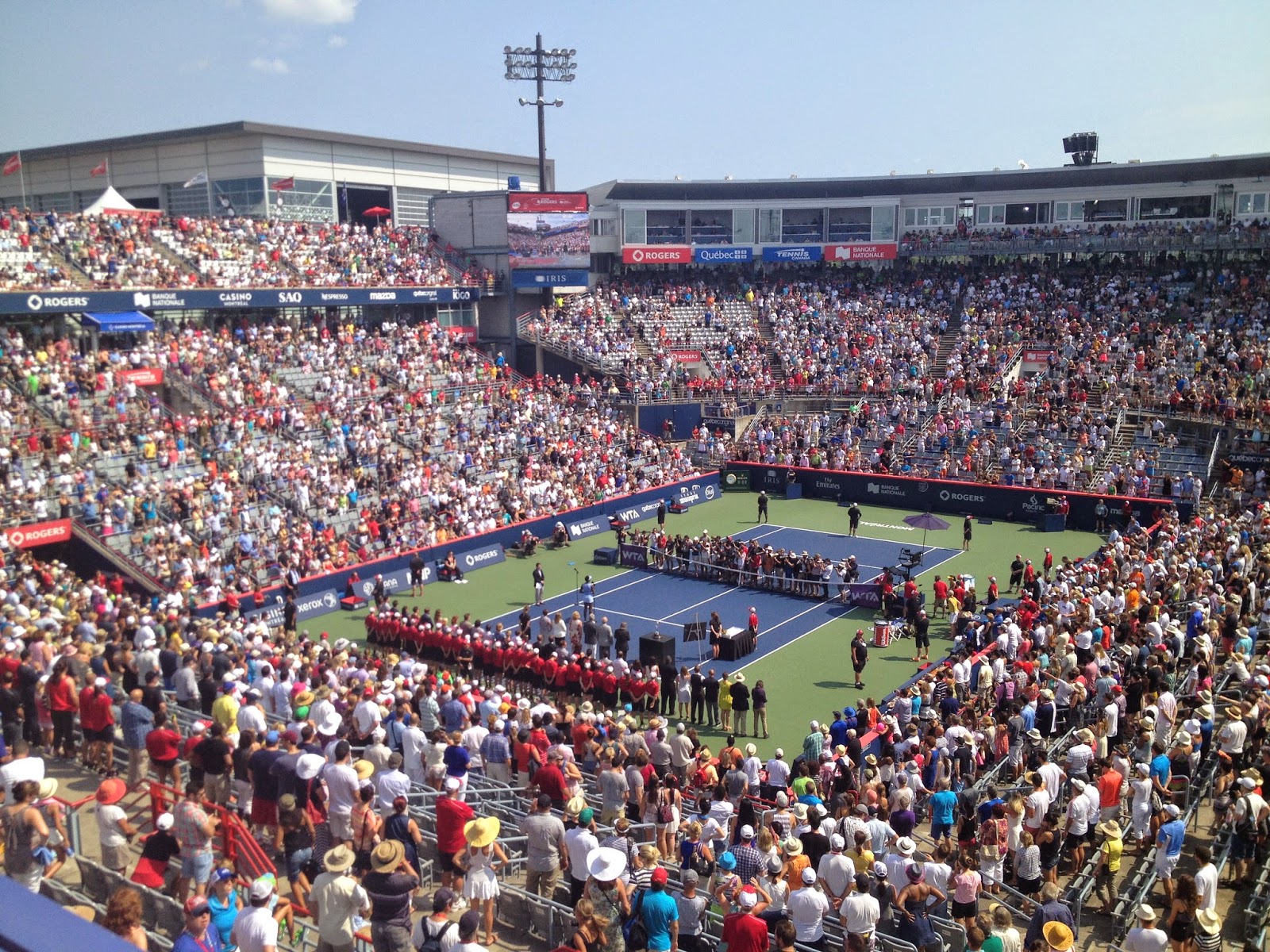 The only WTA-only tourneys I’d attended were the ASB Classic () and Family Circle Cup (), both which are pretty smallish tourneys.  Compared to those, Uniprix Stadium is mammoth. Over 11,000 people fit in this stadium and in the three sessions I attended, it was pretty much at capacity. The crowd in by and large was one of the best I’ve seen and I’ve attended nearly 40 tournaments in the past 15 years. It warmed my women's tennis-loving heart so much.

The first match I saw was Venus versus Serena. I knew that neither sister had played in much (well, Serena once and Venus not ever) and wow did the crowd shower both with huge support. When Venus was introduced, the crowd just roared. Same with Serena. I had chills.

The match itself was just incredible to witness. Venus had been playing so well all week and Serena had gotten to the semis but wasn't super sharp. Like any match, there were periods of not amazing tennis but overall I know that I witnessed one of the best of the Williams Sisters’ 25 matches. I actually was lucky enough to be at their last matchup in the 2013 semis in but that was a one-sided affair won by Serena.

This match however was anything but one-sided and the sisters' power and fitness was on full display. Serena’s serve, the rallies, the dynamic sisters on one court in front of a hugely appreciative crowd...it was all just wonderful. The crowd was enthusiastic and attentive and present. It was a warm sunny Saturday, with two sporting legends on court and the crowd loved every minute of the Williams Sisters clash. It was definitely a highlight of my live tennis watching career.

I'll post more pics later, but here are a few from my two days at the 2014 Coupe Rogers.