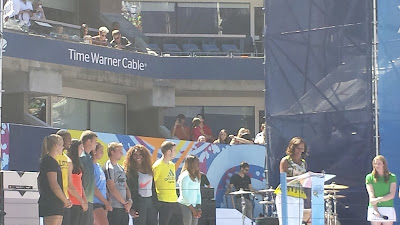 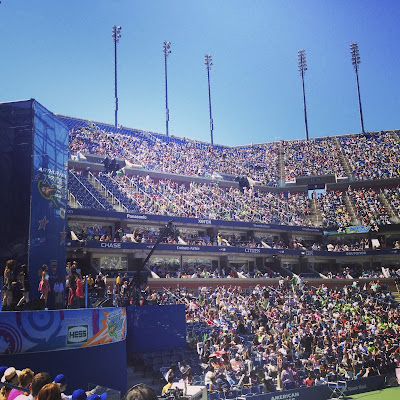 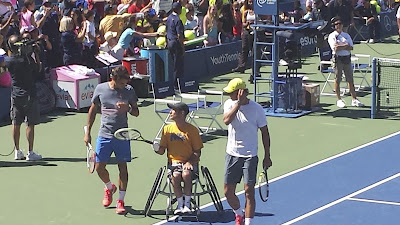 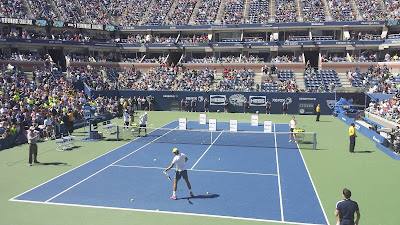 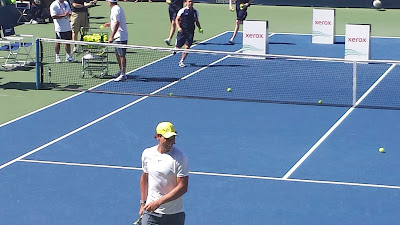 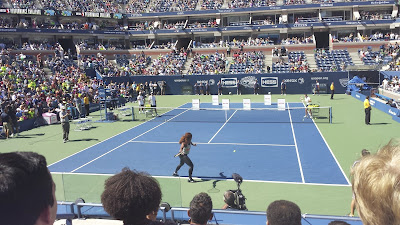 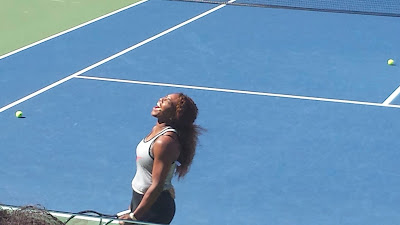 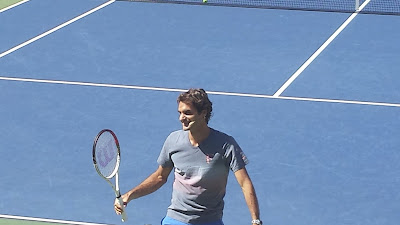 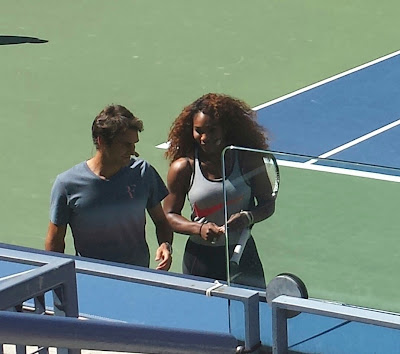 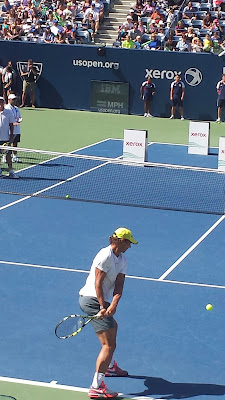 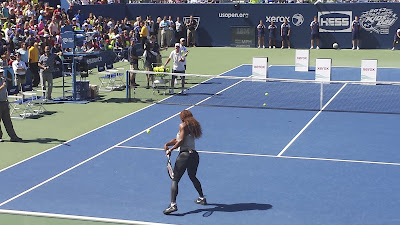 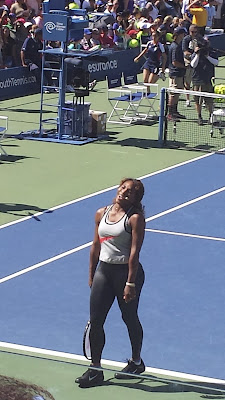 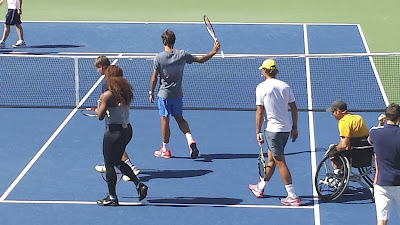 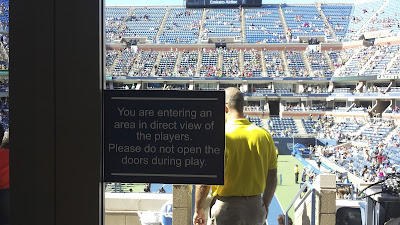 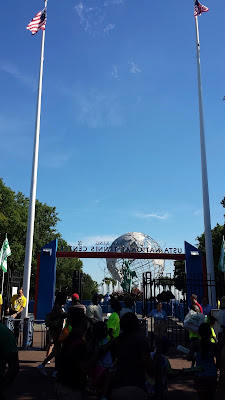 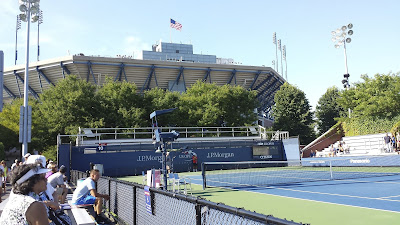 Email ThisBlogThis!Share to TwitterShare to FacebookShare to Pinterest
Labels: Arthur Ashe, US Open

Seven glorious days at the 2013 US Open 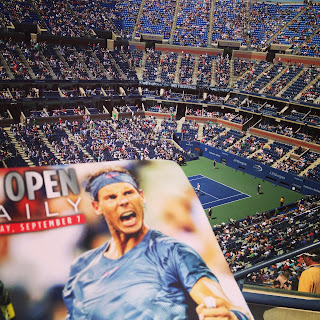 It's always great to attend the US' Grand Slam, and I'm lucky to now live an hour away so I was in NYC three straight weekends. Though tennis was the focus, each weekend was so different.

The first weekend, Arthur Ashe Kids Day, seems like six months ago now. But the thrills I got to experience that weekend still make me shake my head in disbelief.

I was onsite for a work awards luncheon and got to meet some of the most amazing people in the tennis world. I met David Dinkins, Jeanne Ashe, Katrina Adams and USTA President Dave Haggerty. As a tennis nerd, this was a huge day. Our luncheon took place in the USTA Presidential Suite so that in itself was surreal, and we got to watch Arthur Ashe Kids Day from the Presidential Box. Yes, I kept pinching myself. 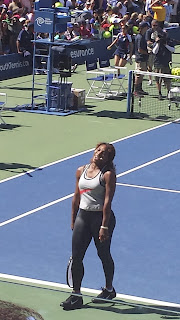 I had a front row seat (well, not literally - I was in the fourth row) for Serena, Rafa and Roger as they competed in the charity skills event and it was amazing. The best part of my day tho, was standing at a podium, reading out bios for our amazing award winners, with David Dinkins standing to my right handing out the awards. And after giving out awards in Arthur Ashe's name, I went up to his widow, the beautiful Jeanne who was smiling at me all the while I read out accolades for the winners. I told her that the first college paper I ever wrote was about Arthur, and it was just a few months after he died. I got to tell her that I was so afraid my grade would get docked due to the excessive length of my paper, but that he was so amazing I couldn't keep to the assigned length. I told her how surreal it was to now, 20 years later, be in a room in Arthur Ashe Stadium celebrating Arthur's legacy. It still makes me tear up.

The day after AAKD, we were back onsite to attend another awards luncheon, this one for winners of the National Junior Tennis Learning (NJTL) Arthur Ashe Essay Contest. Again I was in the same room as Dinkins, who I think is one of the cutest men alive. Just adorable, and so funny as well. It was a pleasure to be in his company two days in a row.

Once the work events were over, it was time to enjoy the grounds on the Sunday before the main draw started. I've never been to the Billie Jean National Tennis Center when it was so quiet. There were still people onsite, but nothing overwhelming so I enjoyed watching a few player practices before heading out for the weekend. But not before catching up with some tennis media friends and crashing a Prince function with the Bryan Brothers! 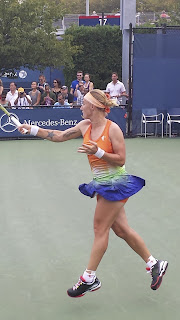 Labor Day Weekend is always a tricky time to visit the open as it's usually fully sold out and there are crazy crowds (and heat). For the second time in three years, however, my mom and I battled the crowds to take in the tennis. Our goals this time were simple: watch Rafa, watch Serena. So we saw Rafa take out Dodig, we got to watch the Bryan Brothers in their tussle with Canadians Nestor and Pospisil plus the Serena/Sloane battle. Our time together ended watching Tommy Haas go down to Mikhail Youzhny. Great stuff!

Serena versus Sloane was by far the most intense match I saw that weekend. I was nervous, as that Aussie Open quarterfinal match left a bad taste in my mouth for awhile. I always feel like it's harder to get perspective on a match when you're there live watching. I felt like I lived and breathed with every point, particularly in that first set. Was it good quality? All I know is that I felt such relief when Serena won. And that Sloane cracked some amazing forehands!

Finals weekend:
Living so close to NYC has its perks, and there was no way I was going to stay away from finals weekend. So I watched Stan battle Novak so well in their five set battle - the crowd was pretty amazing in that match, so it's no surprise many people left after that 4-hour semifinal. Rafa vs Gasquet had a few nice moments, but overall it was pretty straightforward. Rafa/Novak final!

BUT - the ladies final. I'm a live tennis nut, so this was my fifth grand slam final, but first 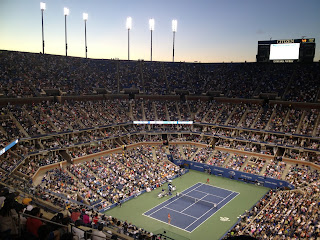 watching a huge fave. Nerves! And being in the Promenade of Arthur Ashe Stadium is not always fun as people are constantly chatting, yelling, coming and going. BUT. Being there - wow. How many times did Serena's dress fly up? How many balls were carried out, or inside the court due to the wind? It was hard to tell from up in the cheap(ish) seats but I clearly saw Serena lose her set and a double break lead. I still can't believe she lost that set but wow the crowd loved that we were going three sets. And when she flew through the third set and closed it out. Amazing! I can't describe watching my longtime fave winning a grand slam. Her fifth US Open. Her 17th grand slam. Dreams!! 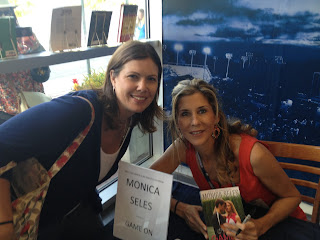 A highlight of ladies' finals day was Monica Seles! She was my first WTA love and she was being inducted into the US Court of Champions before the women's final. But she also was doing a book signing for her new book The Academy: Game On, which I already owned but bought again to get her to sign it. And I got to speak with Monica for a minute or so and got my photo taken. DREAMS!