I started a new job working for the Intercollegiate Tennis Association (ITA) and on my first day, I was invited to attend the Hall of Fame Tennis Championships in Newport, Rhode Island. My 'yes' was immediate so off we went last weekend.

The two days were so different. Saturday was cloudy and rainy and the tennis was cancelled. Then Sunday was superbly hot and the packed schedule meant both the singles semis and final were on tap.


The enshrinement ceremony: Martina Hingis, Cliff Drysdale, Charlie Pasarell and Ion Tiriac. I can't imagine attending the ceremony of one of my favorites being enshrined in the Tennis Hall of Fame. It was emotional enough to be there and witness this amazing day. Rod Laver was there. Bud Collins. Stan Smith. So many tennis legends in one place.

The sound system wasn't fantastic so I need to rewatch all the speeches online but in a nutshell I thought Tiriac was hilarious and Hingis was a bit soft spoken but very emotional. I followed Hingis' entire career and it's hard to believe she's been fully retired five years since her peers Venus and Serena Williams are still going. But Hingis' speech was poignant and made me just remember the amazing player she was, with her mom in the stands. They were quite a pair.

I was lucky enough to be able to be on the court during photos taken after the ceremony. The ITA honors its College Players of the Year so I took a few pics and got to hang around afterward. I was so close to Rod Laver but was too bashful to ask for a pic with him. I did, however, ask Bud Collins for a pic so I did get my tennis fan on. Great afternoon.

The International Tennis Hall of Fame Museum. What better an option during a rain delay than visiting this amazing place. It cost $8 with a tourney ticket and what a bargain. So many fantastic exhibitions and so much history. Loved it. When I went in, Rod Laver and Bud Collins were giving autographs, and Mary Pierce was inside wandering around. So fun.

The Hall of Fame Tennis Championships. My first visit to the Newport tourney was a good one. Lleyton Hewitt took out two-time defending champ John Isner in the semis, which was a nice surprise then Nicolas Mahut beat Michael Russell to make the final. It's never great when a match originally scheduled (and in this case started) on the main court gets moved due to weather but that's what happened on Sunday. I was watching Hewitt/Isner but read that both Mahut and Russell were frustrated by the crowd's movement around court 1 as well as the actual court condition. But, c'est la vie.

The final was decent, but it was so hot on Sunday I was struggling to focus (clearly all those days sitting in the searing Melbourne sun have not made me a heat-loving tennis fan). I was hoping to see Hewitt win the title, but he couldn't close it out and Mahut pulled it out in three sets. Who could not be happy for Mahut? Two grass titles in the past few months, and then he won the doubles semifinal after winning two singles matches, and then won the doubles final the next morning. What a great story.

The tourney itself is in beautiful Newport, Rhode Island (if you go, be sure to drive along Ocean Drive - wow some people are really rich). It's easy to park on the street in walking distance to the tourney. There's a supermarket right next to the grounds and there are plenty of places to eat and drink before or after the tourney. One con - you have to leave the gate to use the toilets so if you do this they will check your bags every time you re-enter. Slightly a pain so get someone to keep your bags!

Here are some more pics from a fab few days:

Email ThisBlogThis!Share to TwitterShare to FacebookShare to Pinterest
Labels: Newport 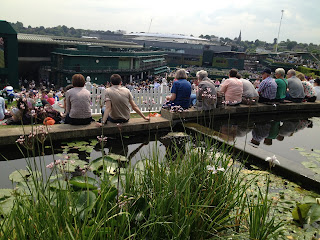 When I decided to attend the 2013 Wimbledon, my priority was being in Centre Court on the first Tuesday to watch Serena Williams, the defending champ and my WTA #1, play her first match. The rest was going to be a bonus - I would be happy with a grounds pass just watching the tennis as watching Serena was my only goal.

So, my Centre Court lineup was to be as follows:

Here were my thoughts leading into the start of play:
1) Is Vika going to be healthy enough to compete? I love Flavia but if Vika feels good she's toast.
2) This should be the best match of the day. I don't like Ernie, but I could see him winning.
3) I will force myself to watch Fed on Centre Court, but Staks is going to win 5-6 games.

Well, those three matches ended up a walkover (and substituted match), retirement and one of the biggest upsets in the history of tennis!


What a day. I stayed the entire day inside Centre Court and watched all the matches except part of Tsonga/Gulbis and it was rather a boring first set and I wanted to charge up my phone (FYI the network inside Centre Court is not good). So I was just watching on a TV just outside my entrance when Jo lost set two and called the trainer. I went back in for part of set three and then Jo retired. I didn't leave my seat again until Federer's match was over.

So many thoughts and here are a few of mine from the day:

1) With all the wackiness that ensued outside of Centre Court, it was extra nerve-wracking to have such a bad network. Especially during Sharapova's loss I was distracted trying to keep up with all the action, which really added to the insanity of the day. For hours at a time I had emergency only data network on BOTH my phones (I suggest to anyone going to the UK to get a free giffgaff SIM card that is a very cheap temp # when you're here - I had two SIMs in prep for queuing).

2) Ana Ivanovic is just a mess.

3) Tsonga's brain is also a mess. What a disappointment that match was. I know Jo had some injury but still, that first set was dullsville.

4) I thought I ought to see Federer play on Centre Court, and I never dreamed I'd see him lose to Sergei Stakhovsky in the second round. A few weeks later, I still can't believe what I saw. So much was written about the lack of support Murray had during the 2012 Wimbledon final as most felt they were much more supportive of Federer. And yes during the Staks match the crowd certainly was cheering for Fed but I really felt they were supporting both players. Perhaps they were thrilled with the thought of a five-setter after two relatively boring matches. Or maybe they were just keen for an upset. Either way, Staks had a lot of support. But really, Fed lost to STAKS? In the SECOND ROUND? I will never really get over the fact I was there watching this historical moment. Wow.

Wacky Wednesday was certainly hard to believe, and it marked my final day at 2013 Wimbledon. I could have gone another day or two, but felt the crazy day seemed the best way for my visit to end.
on July 16, 2013 No comments:

Email ThisBlogThis!Share to TwitterShare to FacebookShare to Pinterest
Labels: Wimbledon

Eastbourne and Wimbledon in photos

Back in the US now following a great few weeks in England. Found it hard to attend the tennis and blog but here are some of the photos from my visits to Eastbourne and Wimbledon!