Greetings from Eastbourne! I arrived at 5pm and raced toward the courts to see how much tennis I could squeeze in. 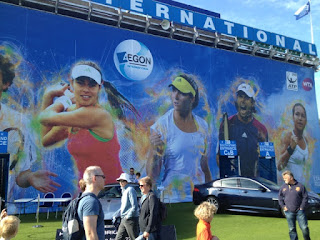 They were still charging full price for tix so I passed on paying £18 for center court access and pressed my luck for a used ticket from someone leaving. Only took one time asking a group of guys and I had a ticket!

Ahhh returning to the lovely Devonshire Park was just wonderful. I did a lap then settled on court 1 for a bit of Ryan Harrison vs Mr Tennis Express, Michael Russell. 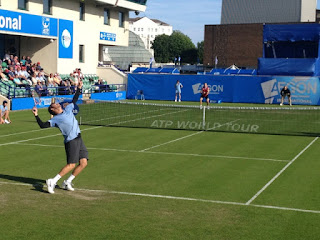 I watched Ryan win the first set tiebreaker and then moved on to check on James Blake. Both Americans won their matches to advance to the main draw.

The last tennis of the day was a set of legends mixed doubles with Lindsay Davenport and Greg Rusedski vs Rennae Stubbs and Mark Philippoussis. It was a bit of fun and I was surprised that Greg was the entertainer. Lindsay was the least but she was the one I most wanted to see. The crowd seemed to enjoy though so it was a fun end to the day. All my pics are bad as the light was tricky where I was sitting... 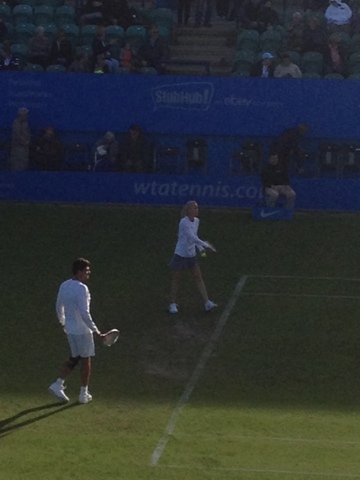 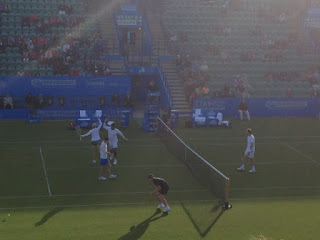 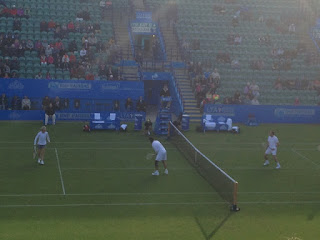 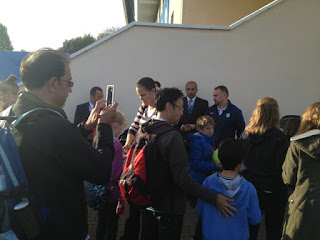 It was a fun few hours and only the beginning as I'm here at least the next three days.

I walked to grab a quick bite after I checked into my hotel and I walked by many players. First was Flavia Pennetta and a male I didn't know talking with Li Na and her hubby. I heard them talking about restaurants but sadly they went in separate directions so they didn't dine together.

As I kept walking, I passed a very made up  Bojana Jovanovski then Sania Mirza. Then I saw Julien Benneteau walking out of a hotel. Players are so accessible here!

Email ThisBlogThis!Share to TwitterShare to FacebookShare to Pinterest
Labels: Eastbourne