Greetings from the Family Circle Cup

Howdy from Charleston! It's been a rainy, then very sunny and warm day here for the final day of the qualifying rounds. Really looking forward to covering the tourney this week for Tennis Panorama News. It was a great first day - lots of families here celebrating Easter and enjoying the tennis. Here are a few pics from Easter Sunday! 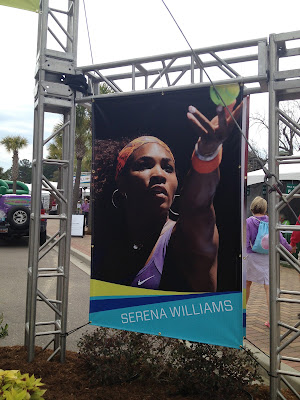 Email ThisBlogThis!Share to TwitterShare to FacebookShare to Pinterest
Labels: Charleston

My first memories of the Family Circle Cup are from 1990 - when Jennifer Capriati made the final as a 14- year old. Those were my very early days of tennis fandom, and now 23 years later I will make my own debut at this fantastic WTA tournament.

Since returning to the US a year ago, I've been overwhelmed by choice. Living again in a country which is home to so many tennis tournaments is like being a kid in a candy store.  I opted for Charleston over Miami for my springtime tourney as I'm a massive WTA fan and I have heard amazing things about Charleston as a visitor destination.

I'll be onsite all week, covering the tournament for Tennis Panorama News. The field is just slightly amazing!

The field is led by defending champ and world #1 and legend and my absolute favourite tennis player, Miss Serena Wiliams. And big sister Venus (who is sadly still nursing the back injury she got in Cincinnati last year) will also be present.

There's also 2011 champ Caroline Wozniacki, whose wildcard was announced today (tho her boyfriend spoiled that news days ago in an interview). Sam Stosur and Sara Errani, both French Open finalists, will also compete to make it four top 10 players. Not bad at all.

Some of the other players I'm very excited to see include the young crew such as Sloane Stephens, Laura Robson, Yulia Putintseva, Monica Puig and Garbine Muguruza. Plus old school favorites like Francesca Schiavone and Jelena Jankovic. It's a fantastic field.

I've only ever attended one WTA tourney, the ASB Classic in Auckland (which I went to five straight years) and I love the intimacy of the smaller tourneys. The Family Circle Cup has been around for 41 years, and from what I know the fans are fantastic and media are treated well.

Email ThisBlogThis!Share to TwitterShare to FacebookShare to Pinterest
Labels: Charleston 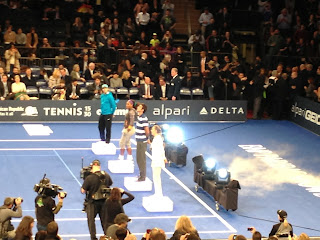 Having never been to Madison Square Garden, I was well thrilled to get tickets to see Rafa, Serena, Del Potro and Azarenka in the BNP Paribas Showdown.

I've been to a lot of tournaments, but no exhibitions since my first actual tennis match which was Agassi, Sampras, Courier and Wheaton exo match way back in 1991.

I was happy enough to be in MSG seeing huge favourite players of mine, so I didn't much care about the quality of the tennis or the entertainment factor. My only hope was that Serena actually competed a bit more than she usually does in exhibitions.

I love indoor tennis with the lights and the great sound being in a stadium yields. When the players were announced, they were actually in the audience and ran down onto the court, giving high fives to lucky members of the audience. I loved that!

Vika was introduced first, then Delpo, then Serena. She got wonderful reaction from the crowd, but Rafa definitely got the biggest cheers. It was fantastic to see him back in NYC after missing the 2012 US Open. 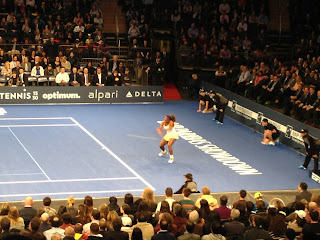 So the ladies were first up, and to me the pace of shots was not that different from a match, particularly from Vika. She was hitting just about as hard as she normally does but thought Serena wasn't always doing that. I will agree the match lacked a lot of interactivity with the crowd which is always fun in exhibitions but this one was much more business than pleasure.

The man whose name I would rather not say, Redfoo, of course made his appearance. He hopped on court to hit a few points with Serena and that certainly broke the seriousness of the match to that stage. From then Vika and Serena tried to keep it a bit lighter...they played a few lefty points etc but overall it was a fairly businesslike affair. Serena 'won' 6-4 6-3.

Then it was time for the men and it was just brilliant to see Rafa again, and as Delpo is my strong #2 fave this was a dream exhibition match for me. Rafa played some brilliant points and seemed to be moving well on the hard courts. Five days later, I can't even remember too much about their match. It was just fun to be there. 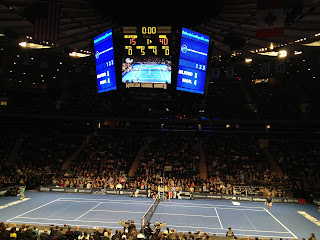 One of the fun moments for me was watching Rafa and Delpo watching the big screen during changeovers. They showed footage from Delpo's 2009 US Open title run and one of all of Rafa's slams. It was humorous to watch these men sitting in their seats, necks craned to watch the big screen hung high from the ceiling.

The moment most talked about from this match was the mixed doubles with Ben Stiller and a young girl Del Potro plucked from the crowd. I was so busy taking pics that I missed the first few shots but it was super cute and Delpo was adorable with this young girl.

Del Potro would 'win' this match 7-6 (4) 6-4. After the net exchange, Mary Joe Fernandez came onto the court and conducted a long interview but for some reason the ticket-paying MSG crowd did not get to hear the interview! They played loud music and only right before MJF asked the guys to speak in Spanish did they turn off the music. If anyone knows the reason for this I'd be very happy to hear it - I was really frustrated by this. I know the match was shown on ESPN2 live, so why couldn't the crowd hear the interview!? 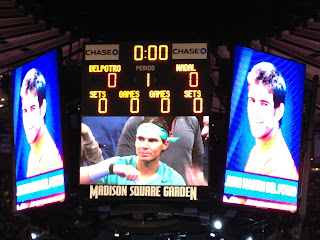 I would also like to know why the BNP Paribas Showdown doesn't include at least a set (even a few games?!) of mixed doubles. What a dream it could have been to see Serena play doubles with her 'fellow booty brother' Rafa! I'd love to see that added into the showdown...

Up close with Serena and Rafa in NYC! 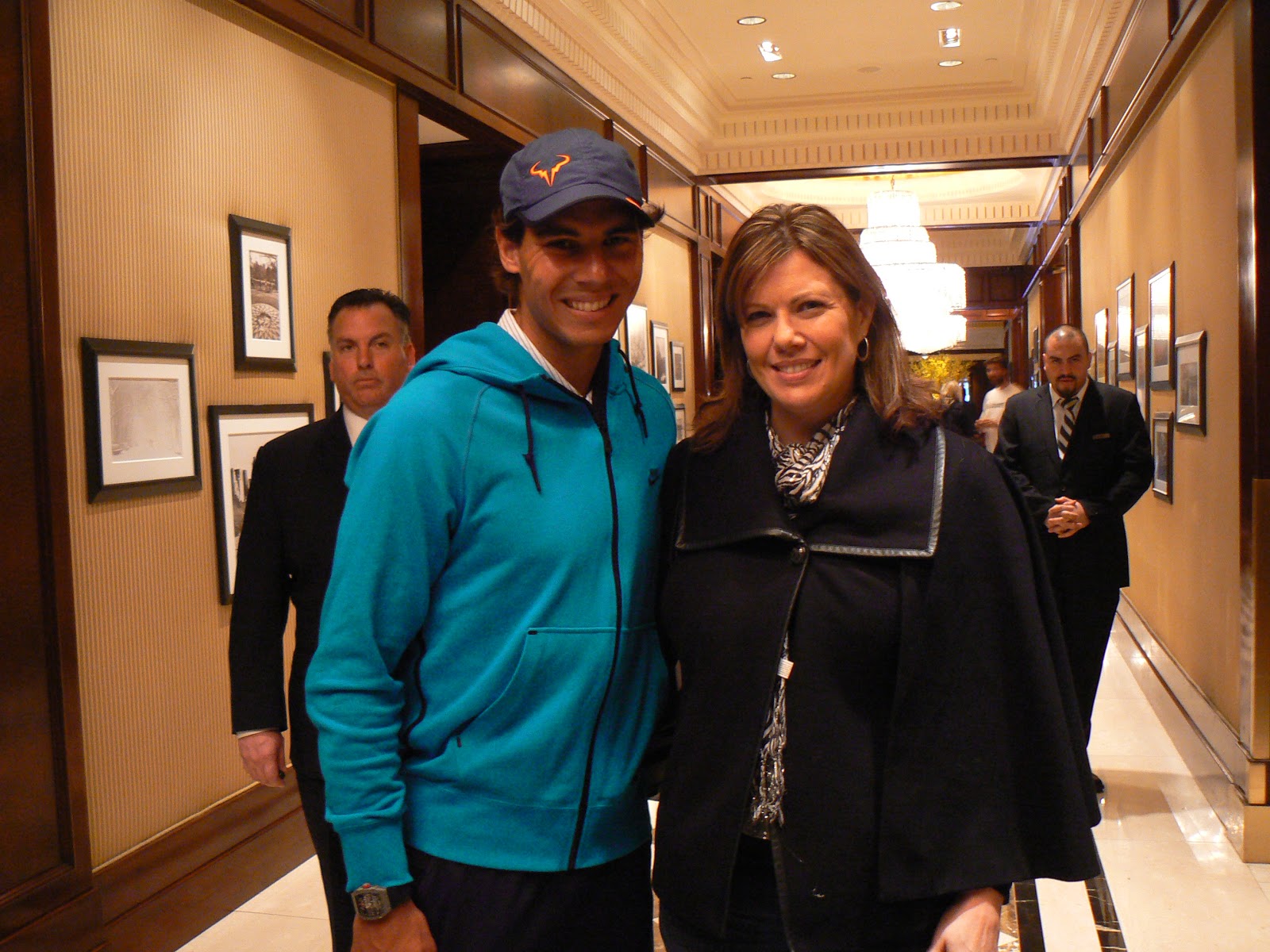 Tennis fans are the best.

This has been proven to me over and over again and I try to pay it forward as well. I've been given French Open tickets from fellow fans. I've been loaned Arthur Ashe tickets to see my faves play from a fellow fan. Another has sent me a bag of Sugarpova signed by Miss Sharapova herself. Seriously. The. Best.

So this week, I was in NYC for a few days to see the BNP Paribas Showdown with Serena Williams, Rafael Nadal, Juan Martin Del Potro and Victoria Azarenka. What a tasty lineup that was way back in October when I got my tickets. I figured by the time March came around perhaps one of these big names would have pulled out (after going to Rafa-less Cincy and the US Open I kept my expectations low), but nope all four were there at Madison Square Garden!

This exhibition was the sole reason I went to NYC and thanks to a few lovely tennis fan friends I ended up in a hotel in Manhattan the morning of the exhibition STANDING NEXT TO SERENA AND THEN RAFA AND GETTING PHOTOS WITH BOTH! 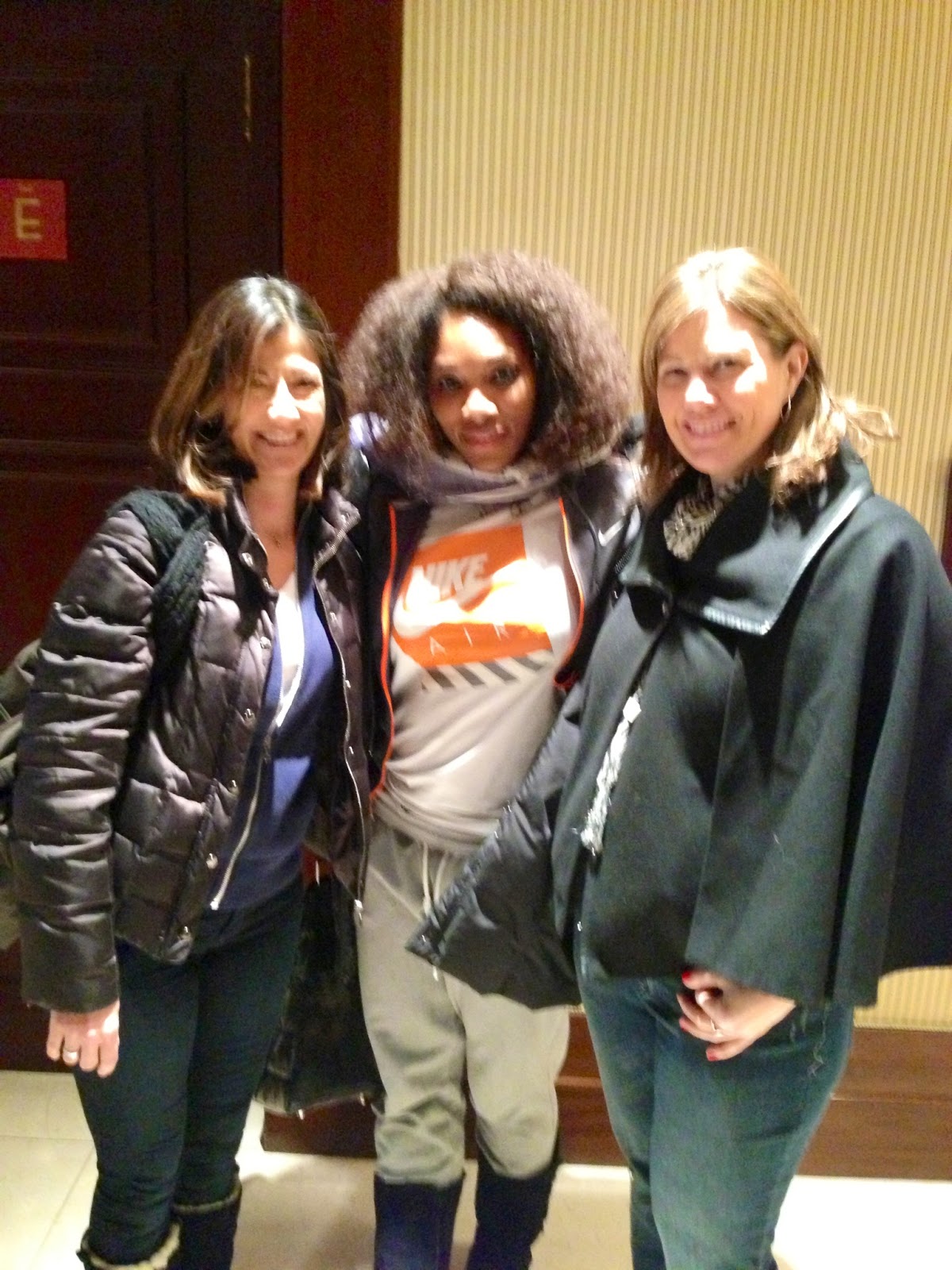 This was just the pinnacle of my tennis fandom to date. I've probably spent 100 days at various tennis tournaments in my life and I've always been shy around players. I have rarely asked for photos or autographs - it usually takes a bit of encouragement from people around me for do either and it just hasn't happened too often.

But get a few more assertive tennis fans friends with me and things happen!

Wise friends knew Serena, Rafa, Del Potro and Vika would be in a hotel doing some pre-event press. So a few lovely ladies went there to check it out and my other friend and I got a text that the players had gone into the hotel. We arrived at the hotel, and literally seconds later Serena was in the hallway with her sister Isha and her agent. She was on the phone and I was content just to admire from afar. No sooner had I started to tweet "OMG I am standing right by Serena!") my friend went up to Isha and asked if we could get a photo. Sandy waves me over and as soon as Serena is off the phone we posed and voila! I may have told her I loved her and that she was amazing. I honestly can't remember. Whatever I said, she said "thank you that's so nice!". It was over and I could exhale, tear up and start shaking. So overjoyed!

No sooner had that happened that Mr Rafael Nadal came around the corner. I think Jeanna had asked if he could pose for a few pics (I was still stunned from my Serena moment) and then he was coming toward us and I asked for a pic. I got a huge smile and a 'sure'. I know I told him I was happy he was back and possibly again that I loved him. What can I say? All four of us got a photo and floated on air the rest of the day. I might still be airborne actually.

Will blog about the MSG exhibition tomorrow - complete with pics!