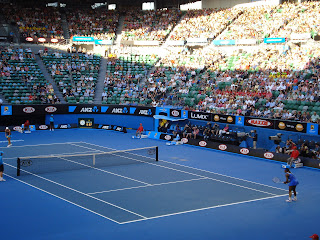 In no way is my tennis addiction waning but I've taken a winter break from writing about tennis.

I was not really looking forward to watching the 2013 Aussie Open, mostly because my NZ to US move meant for the first time since 2009 I would not be in Melbourne for any of the tennis. I've been lucky to attend the Aussie Open five times and it is by far my favourite tournament, hands down. I missed it a lot this year.

For years I've heard US-based Tweeps complain about the Australian time zone. Yes, I hear that - it's not easy from the US but it's not really that bad. For us midwesterners, the coverage started at 6pm which was perfect timing (and didn't require pretending to work while streaming tennis). The only tricky parts came if you wanted to watch a night session match (started 2.30am CST). I'm personally lucky that the night matches rarely compelled me to stay up and I chose not to stay up for either final (watched the ladies final when I woke up).

But after living in NZ for years I gotta say you do not have it so bad in the US in general for year-round tennis watching. Watching the European tourneys from NZ was tough tough tough - try doing the French and Wimbledon back to back. I'm surprised I kept my job...

Back to the actual event. This Aussie Open was so full of drama, some of it warranted, other parts so not.

My highs and lows...

Not having Rafa in Melbourne was rough for many a tennis fan, including two in my house. Slams without Rafa just don't feel the same and I hope this was the last one without him (until retirement of course!).

I'm looking forward to a quiet non-slam week, and my next live tennis is the Madison Square Gardens exhibition on March 4th with Rafa, Serena, Del Potro and Vika - let's hope they are all healthy and able to participate!
on January 27, 2013 1 comment: