My tribute to Jennifer Capriati 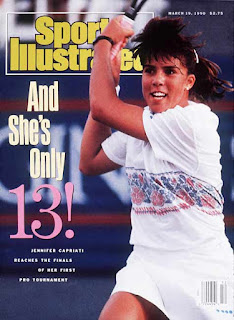 Wow I've been pretty silent on here since I moved back to the US in March. But today's International Hall of Fame inductions have inspired me to dust off this blog!

Today was such a special day for tennis fans, and it was an emotional day for me in particular, as two players who heavily impacted my love of the game were inducted into the International Hall of Fame.

One of those is Jennifer Capriati. In 1990, at age 14, I had played a bit of tennis and had loosely started paying attention to professional tennis (well, at least to Andre Agassi). I remember seeing a Sports Illustrated cover about a young American just a bit younger than me called Jennifer Capriati. Her infamous "And she's only 13!" cover really caught my eye and I was intrigued. So I checked the TV Guide to see if I could catch any of her matches on TV.

I very clearly remember watching the final of the Family Circle Cup in April that year, when Jennifer faced 'the lege' Martina Navratilova. I believe that was the first proper tennis match I ever watched on TV, and I remember being just amazed at this teenage girl pounding the ball so well against such experienced players.She lost in straight sets that day, but Jennifer was so bubbly; it was all so fun for her back then.

I followed her and fellow teen Monica Seles as they became big names in tennis that year. It's funny how tennis has progressed - these two teens were so successful and big stars while so young. Now we see players in their late 20s win slams after never being top players when they were younger. The game is no longer for teens as it was in the 1990s.

Capriati and Seles seemed fearless and hit a fierce ball on the court. I was fascinated with them, and I truly have them to thank for getting me interested in tennis and becoming the crazy tennis addict I am today. 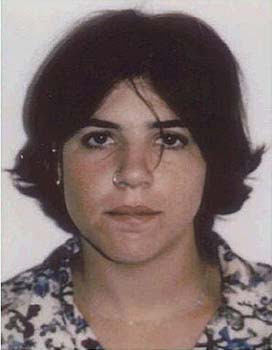 As I watched Monica introduce Jennifer today in Newport, I thought about how these two ladies both had such roller coaster careers (and lives). They both had exits from the games as teens - Jennifer's due to burn out and Monica's to the horrible Hamburg incident. Both came back and tried to recapture their previous glory.

Jennifer found it and won her slams, and then had her career cut short with injury. Depression and a rumored suicide attempt would follow. Monica got another slam post-stabbing, but she was never the same player again, and her career ended with a whimper just as Jennifer's did. It's ironic that neither Jennifer and Monica officially retired from the game, but merely kept the hope up for years that they could return to the game which was their life. It sadly never happened for either.

As a fan of Capriati when she was a teen, the shock and sadness of watching her crash and burn from the game was really hard. She went from being so charming and adorable (and Bart Simpson loving) to a desolate, cranky teen hitting puberty and not enjoying the losing side of pro sports. She rebelled before our eyes, and after a few arrests it was clear this girl was lost. The shoplifting, the drug bust in the seedy hotel.This wasn't supposed to happen. She was supposed to be like Monica and win slams as a teen and hit number one. But not Jennifer. She had bad losses, put on some weight, chopped her hair. It was awkward to watch. And when she came back and just wanted a do-over and didn't want to talk about the dark times anymore....oh the tears in that US Open press conference. I really felt for her.

As much as I think of Capriati's comeback as the stuff of fairy tales and was very happy for her (especially when she beat Hingis in back to back Aussie Open finals!), I was never as big of a fan as I was when she first burst on the scenes. But I certainly was disappointed that injuries never allowed her to play after 2004. I hung onto hope that she'd somehow make another comeback, but she and Monica (who last played a match in 2003) both could not overcome injuries.

Capriati has been very much out of the spotlight for years and although she may prefer it that way, I am thrilled that she recently joined Twitter and hope that she will be able to feed off the love so many fans have for her. Her speech today showed how much the sport meant to her, and how hard it was not to be able to leave on her terms.
"It was tough having to leave the game," she said. "It's like mourning a loved one that's gone and a relationship's that gone, a part of yourself. It wasn't easy, but something that's gone and what you loved to do. It took a while to accept that and let go."

I will always have a special place in my heart for Jennifer, and after all the dark times, I just hope she finds happiness in whatever she decides to do. Selfishly, I'd love to see her involved in tennis in one way or another, but if not I want to thank her for luring me to this amazing sport.
on July 14, 2012 No comments: