I'm in the midst of packing up my life and moving back to the US this weekend after being in NZ for nearly eight years and being overseas for the bulk of the past 13 years. Sadly my packing up and selling of possessions included my TV so I haven't been able to watch much tennis this month.

However, I did get a chance to be interviewed the other week by Grand Slam Gal who is doing her own 'fan slam' in 2012. I met GSG last year at the Aussie Open and caught up again with her at the 2012 Aussie Open so it's been fun to exchange grand slam attendance tales and swap tips.

Here's the interview I did with GSG. Feel free to ask either of us any questions about attending the four slams or share your stories and tips! I found out so much through other other tennis fans on Twitter particularly - there is so much to share about ticketing processes and little bits of info to ensure you make the most of your hard-earned money and time!

US here I come!

Am currently packing up after more than 7 years in New Zealand, and downsizing is proving very difficult. There is NO way I can part with my tennis souvenirs so somehow, someway, I will need to transport these 20 tournament programmes (along with some clippings, tickets and daily programmes) to the US. Talk about valuable cargo! 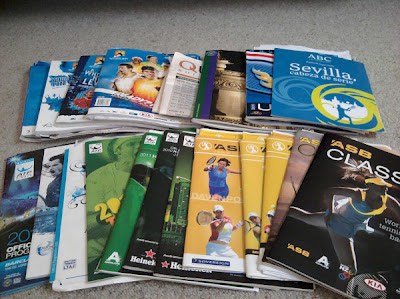 In this photo are programmes from the 20 tourneys I've attended since moving to NZ in 2004:
It's going to be very bittersweet to leave NZ as this is an amazing country, but my mind is already racing about all the tourneys in North American that will be a short flight/drive away.
Let the addiction continue!
on February 08, 2012 No comments: