So I've read a heap of tennis bios: John McEnroe, Boris Becker, Monica Seles (x2), James Blake, Serena Williams, etc etc. I love reading them all, even if I'm not a fan of the player.

I cannot recall any match in which cheered for Pete Sampras during his career. He just did nothing for me - I prefer my tennis players to be flashy, controversial or testy (Andre, Monica, Serena). Or really hot (Rafter, Rafa). Plus Pete beat Andre at the US Open in 1990 and I never got past that. I hold many, many tennis grudges.

So even though I have no love for Pete, I'm reading his autobiography anyway.

A few bits and pieces that I have found interesting:

Pete got slammed by media and tennis pundits in 1991 when he lost in the QF of the US Open to Courier. As defending champ, he made an infamous statement about feeling like a ton of bricks had been lifted off his chest when he lost his title. It's one of the few times I can remember Pete being criticised by media. 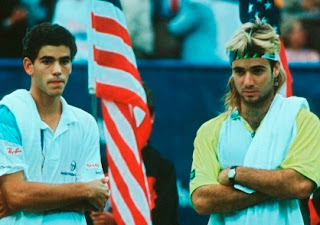 But he made a reference in the book to the fact Andre was also being slammed by media in late 1991, having lost his third slam final that year.

This of course, makes me think of the present situation of Andy Murray. Having personally been at the Aussie Open men's final the past two years, I have seen Andy fail in his last two slam finals. I know he's being bashed for his lack of energy/focus/belief in the finals but I tend to think a comparison with Andre would make people back off Andy a bit.

Look at Andre's first three slam finals - he was heavily favoured in all three:

In all finals, he was expected to win. In contrast, Andy went up against Roger in his first two slam finals, and a very motivated Novak in his third. In none of these matches was Andy the favourite. I just think it's too early to think Andy won't win a major - too much talent not to.

I feel for Andy - never liked him much during his 'show my big guns' stage but the boy's got game and I like that he beats Roger often (just not at the slams - Andy, can you work on that?).

One fun note from the book:  I got reminded that Pete lost to Henri Leconte in the Davis Cup final in 1991. This makes me smile a lot. I just saw Henri play Legends Doubles in Melbourne and after watching Pete today in his exo vs Andre, it cracks me up to think that serious Pete lost to crazy Henri.
on February 28, 2011 No comments:

I've often been told I should write a tennis blog. I'm a trained journalist, one of those people who love to write and I'm a total tennis junkie. I pledge tennis insanity since 1988, when a mulleted Andre Agassi got my 13-year old heart racing. By the time Monica Seles shrieked her way to the French Open title in 1990, I was hooked.

Fast forward to 2011, and as I just watched Andre play Pete Sampras and am reading Pete's autobiography, I feel like it may be time to start having something to show for all those hours spent watching tennis. 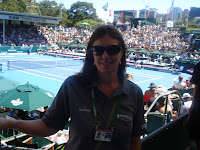 I won't claim to be a tennis expert on anything technical - I have played since I was young and play a lot now, but I'm certain any decent tennis coach would be driven to put their head in their hands when watching my strokes.

I do, however,  have a lot of tennis history in my brain and I hope to have something interesting to say from time to time.